Message from the Museum

The Hakushika Memorial Museum of Sake, lovingly nicknamed “Sake Museum”, is located in Nishinomiya, a city in Hyogo Prefecture. Located between Mt. Rokko and the Seto Inland Sea, the city lies in the eastern part of Nadagogo, the largest sake brewing region in Japan. Since the Edo period (1603-1867), Nishinomiya has prospered thanks to the sake industry and sake brewers helped to develop the infrastructure of the city, and its art and culture as well. Here, the development of the region was and is deeply connected to the history of sake brewing.

In Nishinomiya, the unique city of sake, the Hakushika Memorial Museum of Sake (Sake Museum) was established with the purpose of passing down the history of traditional sake brewing to future generations as a part of our living cultural heritage. Over one million people have visited the museum since its opening in 1982, including local elementary and junior high school students to learn about sake brewing as a local industry. The museum utilizes an old sake brewery which brings the city of sake of the past to life, and preserves the traditional sake brewing tools which are gradually disappearing from the practice as well as historical materials related to sake. The history and the culture of sake and cherry blossom trees, including pieces from the Nishinomiya City Sasabe Sakura Collection entrusted by Nishinomiya City, are exhibited at the museum to be studied and enjoyed by visitors.
It is our wish to create a space where our guests can have new discoveries and encounters at the museum as well as relax and enjoy themselves.
We look forward to you visiting the one and only museum of sake and sakura in Japan.

Overview of the Sake Museum

May
A museum establishment plan was resolved by the board of directors’ meeting of Tatsuuma-Honke Brewing Co., Ltd. as their 320th anniversary project.
December
A request of entrusting Sasabe Shintaro’s collection of items related to cherry blossom trees to the museum was received from Nishinomiya City.

February
Establishment of incorporated foundation was approved by Hyogo Prefectural Board of Education.
April
Entrust agreement of the late Sasabe Shintaro’s collection of items related to cherry blossom trees to the museum was made with Nishinomiya City.
Incorporated Foundation Hakushika Memorial Museum of Sake was opened as a cultural zone of sake, with the two buildings “Kinen-kan and “Sakagura-kan”.

February
Based on the Museum Act No.23, the resistration to Hyogo Prefectural Board of Education’s registration ledger was completed as a humanities museum.
October
Awarded the 24th BCS (Building Contractors Society) Prize.

January
The Great Hanshin-Awaji Earthquake occurred. Some of the museum facilities, such as the former Sakagura-kan and the reception desk were completely destroyed, other buildings were also damaged.
March
The Kinen-kan was reopened. Reconstruction of the Sakagura-kan was being planned.
July
Former Sakagura-kan and the reception desk was delisted from the tangible folk cultural properties of Nishinomiya City.
October
Former residence of Tatsuuma Kijuro was returned to a personal property from the adjoining facility of the museum.

March
The former main brewery building of Tatsuuma-Honke Brewing（built in 1869）was reconstructed and reopened as a new Sakagura-kan. The two museum buildings – The Kinen-kan and the Sakagura-kan were nicknamed “Sake Museum” as a whole.

March
The former main sake brewery building of Tatsuuma-Honke Brewing (present-day Sakagura-kan), the remains of a rice steaming place Kamaba in the Sakagura-kan, a set of sake brewing tools and a set of sake brewing tubs and vats and the former residence of Tatsuuma Kijuro were accredited as cultural properties of Japan Heritage under the theme “Itami and Nadagogo – the famous sake brewing regions created by transporting Itami Morohaku (the sake made only of polished white rice) and Kiippon of Nada (pure sake of Nada) to Edo known as Kudari-zake”. 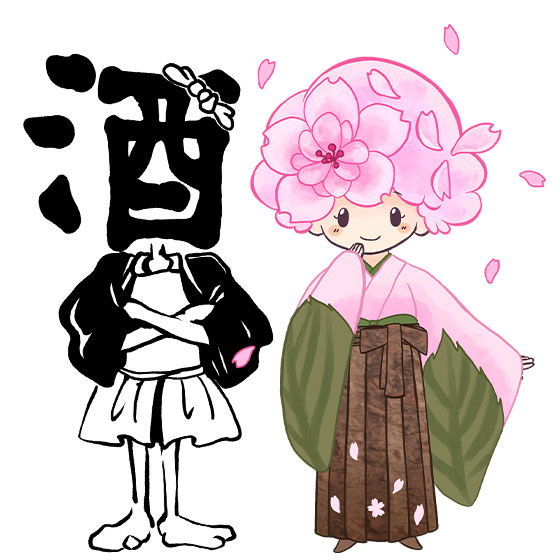 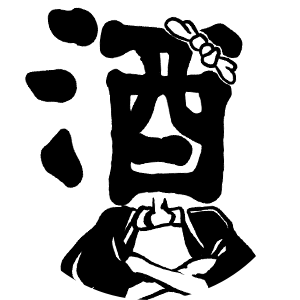 Sake-kun is a Kansai-jin (a person from the Kansai region) who is obsessed with sake.
He is an experienced sake brewing craftsman.

There are hundreds of surprises about sake. Let's find them all! 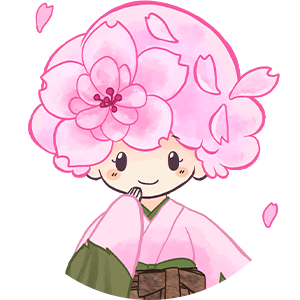 Sakurako-chan is a fairy of Sasabe-zakura cherry blossom tree studying about Mr. Sasabe who had tended her.

The more we learn about Mr. Sasabe, the more we like him! As we learn more about sakura, our appreciation
for these beautiful tree grows!